Do you have a set of good china that rarely gets used, perhaps only once or twice a year, on major holidays? Maybe you also own a second set of good dishes, inherited from your mom or grandma, that never leaves the cabinet. Many of us save our “better items,” waiting for that special occasion or milestone event to pull them out and use them. 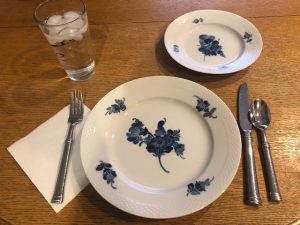 Until recently, I too was guilty of using my good dishes only a few times each year. As I was thinking what a shame that was, I remembered an old essay I had ready many years ago by Erma Bombeck entitled “If I Had to Live My Life Over.”

Someone asked me the other day if I had my life to live over would I change anything.
My answer was no, but then I thought about it and changed my mind.
If I had my life to live over again, I would have waxed less and listened more.
Instead of wishing away nine months of pregnancy and complaining about the shadow over my feet, I’d have cherished every minute of it and realized that the wonderment growing inside me was to be my only change in life to assist God in a miracle.
I would never have insisted the car windows be rolled up on a summer day because my hair had just been teased and sprayed.
I would have invited friends over to dinner even if the carpet was stained and the sofa faded.
I would have eaten popcorn in the “good” living room and worried less about the dirt when you lit the fireplace.
I would have taken the time to listen to my grandfather ramble about his youth.
I would have burnt the pink candle that was sculptured like a rose before it melted while being stored.
I would have sat cross-legged on the lawn with my children and never worried about grass stains.
I would have cried and laughed less while watching television…and more while watching real life.
I would have shared more of the responsibility carried by my husband which I took for granted.
I would have eaten less cottage cheese and more ice cream.
I would have gone to bed when I was sick, instead of pretending the Earth would go into a holding pattern if I weren’t there for a day.
I would never have bought ANYTHING just because it was practical/wouldn’t show soil/guaranteed to last a lifetime.
When my child kissed me impetuously, I would never have said, “Later. Now, go get washed up for dinner.”
There would have been more I love yous…more I’m sorrys…more I’m listenings…but mostly, given another shot at life, I would seize every minute of it…look at it and really see it…try it on…live it…exhaust it…and never give that minute back until there was nothing left of it.

This reflection caused me to question why I rarely used my good china.

That resulted in a kitchen swap, moving the good dishes to the lowest, most accessible shelf in the cabinet and moving the previously everyday dishes to a higher shelf. For the last several weeks, I’ve been enjoying using my china three meals a day, which has been making me so happy.

So, what are you waiting for? Whether it’s dishes, that good sweater, or that special coat, don’t store it away for “someday.” Pull it out, enjoy it, and seize the day. Conversely, if you have no interest to use it or wear it, don’t hold on to it; donate it, sell it, or give it to a friend or family member who will enjoy it. As always, if sorting through things on your own is too overwhelming, we’re here to help!

To help you save time, save money and reduce stress.

“Deborah Gussoff saved our anniversary trip.” “The last time we traveled out of town — an overseas business trip followed by our first cruise – we turned off our cell phones, computers and pushed home maintenance to the back burner. Did I really... (Read More)

Every time the doorbell rang, I was worried that it was the Fire Marshall, coming to shut me down, declaring my office a safety hazard. The piles of bills, magazines, catalogs, school bulletins and forms seemed to be reproducing. Then I met Deborah. I was her... (Read More)

I take pride in the fact that I am an organized person. However, Deborah revised my filing system in ways too obvious for me to consider, especially with my busy schedule. She is the efficiency specialist and anyone could surely benefit from her... (Read More)

Deborah was one of a few organizers I had interviewed to help me deal with integrating my office into my already existing home office. I chose her to work with because I sensed she had the best combination of professionalism and warmth. Professionalism... (Read More)

When I was told that I would be moving from my office of 10 years to a cubicle I have to admit I felt a little overwhelmed! I had files upon files and a long history of event scripts, contracts, agendas, ad journals, programs, invoices etc. I didn’t know... (Read More)